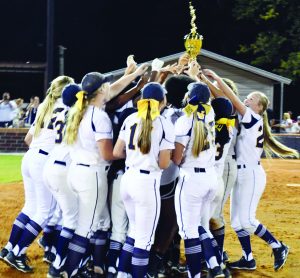 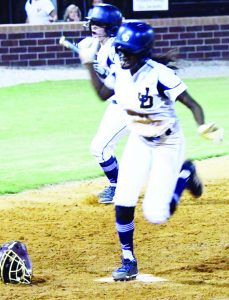 Jeff Davis High’s softball team captured the 2018 Region 2-AA Championship last Thursday with a 1-0, 9-inning win over the Vidalia Lady Indians in Hazlehurst.
Senior pitcher Lanie Scott held Vidalia in check through all nine innings and the defense backed her up playing without an error. Meanwhile, the Lady Jackets had opportunity after opportunity putting more than a dozen runners on base with seven hits, 14 walks and two hit batters. But it wasn’t until the bottom of the ninth that they could push a run across the plate.
In the ninth, with FeFe Green on first base, the Lady Indians chose to intentionally walk Karli Williams and Dee Wooten to load the bases, pushing Green to third base. Green scored quickly on a passed ball and Jeff Davis had its championship.
Ironically, in the 2017 Region 2-AA Tournament, Vidalia and Jeff Davis met in the semifinals and in the first game of the best-of-3 series, Vidalia chose to intentionally walk Williams twice. And both times, the Lady Jackets scored as Jeff Davis won 4-3. They then won the second game 9-0 to go to the finals where they fell in eight innings to Bacon County.
Scott allowed only four baserunners in what may have been the best performance of the season for the senior hurler. She gave up three hits, walked only one and struck out six.
Designated hitter Marlee Colson led the offense, going 3-for-3 with two doubles and a single. FeFe Green, Jakhia Green, Wooten and Caroline Waters each had singles.
Vidalia was reluctant to pitch to Williams as she walked three times and was hit by a pitch, getting only one pitch to hit.
FeFe Green and Wooten both stole a base.
The win left Jeff Davis with a 20-9 record and Vidalia with a 19-10 record.
In the game to decide the No. 3 and No. 4 seed in the state tournament, Metter surprised Bacon County with a 4-3 win.
Score by innings:
VHS 0 0 0 0 0 0 0 0 0 -0
JDH 0 0 0 0 0 0 0 0 1 -1