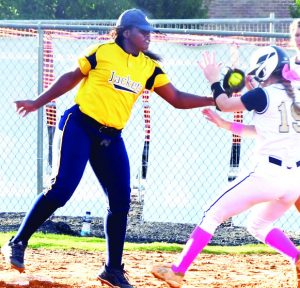 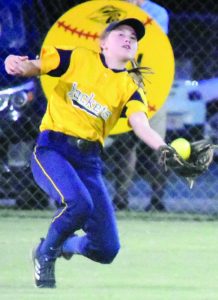 Jeff Davis High School’s softball team split a pair of games last week, falling 5-2 to Brantley County in a non-region game Monday in Nahunta and rolling over Toombs County 18-0 Wednesday in Lyons. Monday, the Lady Jackets hosted Metter and came away with a 13-1, 4-inning win.
The games left the Lady Jackets with a 15-7 overall record and 10-2 in Region 2-AA, second behind first place Vidalia, 11-1. Vidalia’s lone loss came at the hands of Jeff Davis, whose two defeats came at the hands of Bacon County. Bacon was defeated twice by Vidalia.
Jeff Davis and Vidalia played yesterday (Tuesday) in Vidalia.
In Nahunta Monday, Brantley County got all the runs they needed in the third inning on a grand slam homerun as the Yellow Jackets could manage only a pair of runs.
Brantley’s third inning started out well for the Lady Jackets as starting pitcher Lindsey White retired the first two batters on grounders to third baseman Jakhia Green. But then the Lady Herons got three straight singles, two of which didn’t leave the infield, to load the bases and a homer to center field put Brantley up 4-0.
In the fourth, JD’s Dee Wooten hit a line drive home run to right to make it 4-1.
Brantley scored an unearned run in the fifth to go up 5-1.
In the seventh, Lanie Scott walked, Jakhia Green got an infield single and Caroline Waters walked to load the bases with one out. After a strikeout, Scott scored from third on a passed ball. But then a ground out ended the game.
The Lady Jackets managed only three hits with Wooten leading the way with her solo homer. Fefe Green and Jakhia Green both had singles.
White took the loss. She went four innings and gave up four runs on eight hits, walked one and struck out two. Lanie Scott pitched two innings, giving up one unearned run on three hits, walking one and striking out none.
In Lyons Wednesday, the Lady Jackets routed Toombs with a 14-hit attack. They jumped on top 5-0 in the top of the first inning, scored six in the third and seven more in the fourth as they won in just four innings.
Scott hurled a two-hit shutout through three innings and White finished off the Lady Bulldogs with three straight strikeouts in the fourth.
Wooten again led the hitting with a double, two singles and three RBI. Karli Williams had a pair of singles and drove in three runs, Jakhia Green, Amillian Clements and Paige Carter each had two singles and two RBI, Karlie Watson singled in a run, Marlee Colson and FeFe Green both singled, Kesleigh Poe had two RBI and Georgia Roberts drove in a run.
Both Scott and White did not issue a free pass on the mound with Scott fanning two batters and White three.
Monday, the Lady Jackets teed off on the Metter pitching with a 15-hit attack and three players got three hits.
Carter led the way with a double, two singles and two RBI, Wooten had three singles, a sacrifice and two RBI, FeFe Green had three singles and one RBI, Colson had a double, a single and four RBI, Scott had a double, a single and three RBI, and Williams had two singles and two RBI.
White pitched a one-hitter and the Lady Tigers’ only run was unearned. She walked one and struck out one.
Score by innings:
JDHS 0 0 0 1 0 0 1 -2
BCHS 0 0 4 0 1 0 x -5