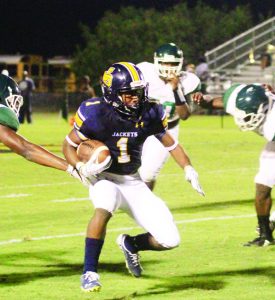 Jeff Davis High School’s football team hasn’t played many overtime games over the years. Before last Friday’s 41-40 overtime win over Windsor Forest, the last time the Jackets went into extra periods was in 2015 when the lost 14-7 to Bryan County. The year before, they also lost in overtime to Bryan County 27-21.
It was in 2012 that the Jackets last won an overtime game, a 33-25 win over Atkinson County.
And, of course, the most memorable overtime game the Jackets lost was to Mitchell-Baker in “The Thrilla in Camilla,” in the 1989 state playoffs. Mitchell-Baker went on to win the state championship that year and their only real test of the playoffs was against Jeff Davis.