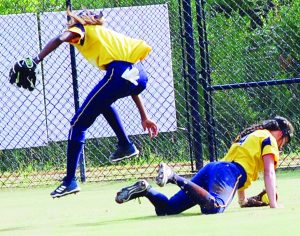 But Bacon County scored two runs in the bottom of the seventh inning to pull out a 5-4 win.
The game was tied twice, at 2-2 and 3-3, the last tie going into the seventh inning. In the top of the seventh, JD scored a single run only to see the Lady Raiders pull ahead in the bottom half of the inning.
Sophomore shortstop Paige Carter picked up where she left off during her freshman season as she led the Lady Jackets at the plate, going 3-for-4. Dee Wooten had a pair of singles, a sacrifice and two RBI, Karli Williams doubled in a run, Lanie Scott, FeFe Green, Alison Herrington and Caroline Waters each had a single, Jakhia Green picked up an RBI and Karlie Watson added a sacrifice.
For FeFe Green, Thursday’s game was a homecoming of sorts as she played last year for Bacon County before transferring to Jeff Davis this fall.
The Jackets were 4-for-4 in steals as Carter swiped two bases and FeFe Green and Amillian Clements one each.
Scott took the loss, going 6 1/3 innings and giving up three earned runs on five hits, walking two, hitting two and striking out two.
Score by innings:
JDHS 1 1 0 0 1 0 1 -4
BCHS 2 0 1 0 0 0 2 -5