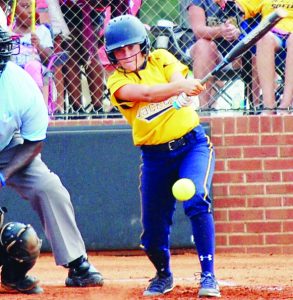 Jeff Davis High’s softball team lost another heartbreaker Monday in Hazlehurst, falling to Pierce County 4-3 in eight innings as the Lady Jackets’ record dropped to 0-2. Last week, Bacon County scored two runs in the bottom of the seventh inning to squeak out a 5-4 win in JD’s season opener.
Monday, Jeff Davis fell behind 3-1 after two innings but battled back to tie the game with single runs in the third and fifth innings. In the top of the eighth, the Lady Bears broke the tie with a single run and then blanked JD in the bottom half of the inning.
Jeff Davis managed only five hits, two coming off the bat of catcher Karli Williams who doubled and singled and drove in a run.
Paige Carter, Georgia Roberts and Bianca Torres all singled. Roberts had an RBI, Lanie Scott had two sacrifices and Amillian Clements also had a sacrifice.
Lindsey White started at pitcher and went four innings. She gave up one earned run on five hits, walked none and struck out one. Scott took the loss in relief, pitching the final four innings. She gave up one run on three hits, walked one and struck out one.
Score by innings:
PCHS 1 2 0 0 0 0 0 1 -4
JDHS 1 0 1 0 1 0 0 0 -3