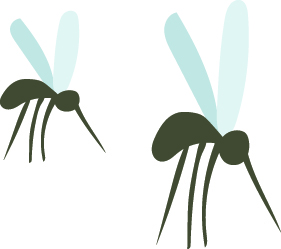 By
MARY ANN ANDERSON
Help could be on the way for city residents who are tired of battling fire ants, mosquitoes, and other insects.
During last week’s short 18-minute regular monthly meeting of the Hazlehurst City Council, Mayor R. Bayne Stone briefly outlined a proposal by Southern Fire Ant and Mosquito Control of Unadilla that would help combat the critters.
Stone said that the company would spray city-wide for insects, with a small increase of the cost possibly being added to monthly water bills. He said that Southern Fire Ant already works with several municipalities in the state and that the company comes highly recommended.
“We need some kind of control,” said Ward Three Councilman Eric Griffin, before half-joking, “We do have a mosquito problem here. They are big enough where they can stand flat-footed and fly off with you. I think it’s worth them coming down and presenting it to the council.”
The council then agreed to Stone’s suggestion that a representative from Southern Fire Ant present its plan in more detail at the August work session.
In other action during the work session of July 12 and regular meeting of July 19, the council ….
…. heard from Ward One Councilman Dywane Johnson and Ward Four’s John Bloodworth as they reignited the years-old conversation for the need of a traffic light at the intersection of Highway 341 and North Miller Street near Dairy Queen and Mac’s Milk. With Stone saying that the Georgia Department of Transportation still has an active order for installation from discussions in 2012 and 2013, the council agreed to get updated costs and designs for the light.
…. discussed but took no action on the pending contract between the city and the Jeff Davis County Board of Education for hiring officers from the Hazlehurst Police Department as resource officers at the schools. The council also agreed for the Police Department to furnish its pickup truck to the officers, and then instructed Police Chief Ken Williams to get estimates on a new vehicle to replace the truck.
…. heard a brief update from Stone on the Georgia State Patrol station that will be built in Hazlehurst, with his urging the full council to attend the next meeting of the Jeff Davis County Commissioners to work out an intergovernmental agreement between the two governments that will focus on construction of the new building and other issues.
…. briefly discussed but took no action in both the work session and regular meeting of finalizing the 2018-19 budget of $5,376,460, with Stone concluding that it is a “good” budget.
…. also discussed but took no formal action on renewing the intergovernmental agreement between the City of Hazlehurst and Jeff Davis County in which the city agreed for the county to continue holding municipal elections at the courthouse rather than city hall.
…. approved the minutes of March and April work sessions and regular meetings, as well as June departmental reports, water and sewer adjustments, and check registers to pay bills.
…. unanimously approved the recommendation of Anita Herndon to replace Jim Peterson on the advisory board for the city-owned Twisted Pine Golf Course.
…. agreed for the Hazlehurst Fire Department’s Dustin Hutto, David Sellers, and Calvin Hitchcock to travel to New Mexico for U.S. Department of Homeland Security training, with Homeland Security picking up 100 percent of the costs for travel and training.
…. approved part-time employment for Calvin Hitchcock with the Statesboro Fire Department.
…. voted to recertify by resolution Hazlehurst as a Georgia Municipal Association Certified City of Ethics.
…. discussed but took no formal action after Stone relayed that the city used its line of credit to pay J. Hiers and Company for work completed at Hazlehurst Municipal Airport.
…. after hearing a lengthy talk by Stone, unanimously agreed to the request of the Hazlehurst-Jeff Davis Chamber of Commerce to move the annual Georgia Great Steak Cook-Off to the community center at Twisted Pine. Stone also said the event will coincide with the Georgia-Florida game on Oct. 27 and that it should be “quite a day” and a “real hoedown.”
…. during closed session, agreed to purchase a tract of land on Hawthorn Road from Wayne and Gail Hall for $3,500. The almost one-acre property near the airport includes timber that will need to be removed, per mandates from the Federal Aviation Administration, and a well and septic tank system.