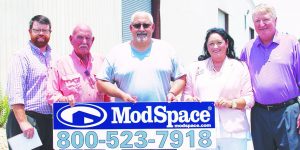 By JAMIE GARDNER
Baxley News-Banner
Modular Space Corporation, better known as ModSpace, is expected to open a refurbishing facility in Baxley in October. The new company projects that at full capacity, it will employee approximately 80. ModSpace has agreed to a five-year lease agreement with the Southeast Georgia Regional Development Authority on the General Housing/Contender Boat/All American Space Solutions Building located on Highway 341 West in Baxley. The lease is renewable at the end of the five years, or the company also has the option to purchase the building at the end of the lease.
ModSpace is a leading innovator in modular construction and among the largest nationwide providers of mobile offices, classrooms and modular buildings for temporary or permanent use. ModSpace serves a diverse set of customers and markets, including commercial, construction, education, government, health care, industrial, energy, retail/franchise and special events through an extensive branch network across the United States and Canada. According to Director of Manufacturing Eric Snyder, the company currently owns around 100,000 rental units. Snyder was in Baxley last week to begin the process of prepping the facility for operation.
The company was formed in April, 2007, following Resun Corporation’s acquisition of General Electric Capital Corporation’s (GE) North American modular space business. The combination of the two complementary businesses created the largest U.S.-owned modular building provider. ModSpace is headquartered in Berwyn, Penn., and has 80 sales and service locations throughout North America.
ModSpace works with manufacturers around the country to build out units to meet customer demand, including manufacturers here in southeast Georgia. The Baxley facility will be the company’s third refurbishment facility. Additional facilities are located in Elizabethtown, Penn., and Tooele, Utah. Snyder explained that the company uses the refurbishment facilities to make repairs to previously-leased units before releasing them to the next customer.
Representatives from each community that make up the Southeast Georgia Regional Development Authority were on hand last week to meet with Snyder at the facility including Executive Director of the Development Authority of Appling County and Chairman of the Southeast Georgia Regional Development Authority Dale Atkins, CEO of the Joint Development Authority for Jeff Davis, Hazlehurst and Denton Andrea Taylor and Executive Director of the Bacon County Development Authority Kevin Ellis. Also present at the meeting was Appling County Commission Chairman Lewis Parker. Each representative present had positive comments about the commitment by ModSpace. The three communities share in tax revenues produced by the project.
Atkins said, “If there’s a silver lining to losing All American Space Solutions (prior company that was housed in the building), it’s that we now have Modular Space Corporation. ModSpace is a national company with its first manufacturing presence in Georgia. What a win for our three counties and the state of Georgia. A hearty thank you to the regional authority and each of our county authority boards for making this happen.”
“Regionalism is the key to economic development success,” said Taylor. “We are proud to be able to partner with Appling and Bacon counties to bring jobs and investment to our region.”
“Bacon County understands the importance of working with our neighbors to promote economic growth in Southeast Georgia,” said Ellis. “We appreciate the new jobs ModSpace will create for the Tri-County area. Without the traffic issues found in larger communities, residents in Appling, Bacon and Jeff Davis are within a 30-minute commute from the Joint Development Authority’s site along Highway 341.”
Chairman Parker said, “I am just so appreciative of how everyone has worked together to bring industry to our area and also appreciative of the relationships we have with our neighboring communities.”
If you would like to know more about ModSpace, visit www.modspace.com.