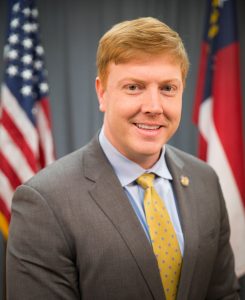 The Jeff Davis County Veterans Association will hold its annual Memorial Day ceremony May 28 at 10 a.m. at Veterans Square Park on Tallahassee Street to honor veterans who lost their lives in defense of America’s freedoms.
The keynote speaker is State Senator Blake Tillery, who represents Georgia’s 19th District, which includes Jeff Davis County.
Tillery was elected to the State Senate in 2016, and serves on the Appropriations Committee, Judiciary Committee, Economic Development and Tourism Committee, and State Institutions and Property Committee.
Prior to his election, he was chairman of the Toombs County Commission and served on the Heart of Georgia-Altamaha Regional Commission, the Regional Workforce Investment Board, the Board of the Toombs County Boys and Girls Club, and the Vidalia Kiwanis Club Board of Directors. He co-chaired the Leadership Toombs-Montgomery program for the Toombs-Montgomery Chamber of Commerce.
Named as a Georgia Trend 40 Under 40 honoree in 2013, Tillery is a graduate of the Leadership Georgia Class of 2015, a member of the Conservative Policy Leadership Institute, and a graduate of Republican Leadership for Georgia.
Tillery graduated from the University of Georgia in 2006 with a degree in International Affairs and from the University of Georgia School of Law in 2010 with a Juris Doctorate. Currently he is managing partner at Smith and Tillery, P.C. in Vidalia. He is married to Dr. Ashlee Nicole Tillery of Wayne County. The couple resides in Vidalia.
During the ceremony, names of veterans who lost their lives in combat will be read and a moment of silence observed, followed by special events and music presented by Steve Underwood, Steve Land, John Reed, and Dustin Hutto.