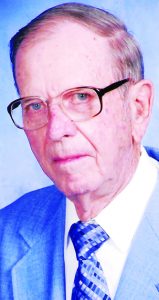 One of Jeff Davis County’s finest citizens died Sunday at Navicent Health in Macon. Longtime educator B.H. Clayton died after suffering a stroke last week in Hazlehurst and being transferred to Macon by Lifeflight helicopter. He was 93.
Mr. Claxton was born Nov. 15, 1926, in Jeff Davis County to the late Elzie Hubert Claxton Sr. and the late Janie Newman Claxton.
The U.S. Army veteran was known across the state and nationally for his work in agriculture education and leadership in the local, state and national FFA organization. He taught for 38 years, 31 of which were in the Jeff Davis County School System where he led the agricultural education program. Following his retirement from teaching, he spent 12 years as a member of the Jeff Davis County School Board.
Mr. Claxton served on state and national committees developing agriculture curriculum used across Georgia and the United States.
Active in almost every area of community service, he was a longtime member of the Lions Club of Hazlehurst, served many years as a director of the Hazlehurst-Jeff Davis County Chamber of Commerce and was the driving force behind the creation of the Jeff Davis County Fairgrounds and the Fair Association that operated it for many years. He was president of the Fair Association.
He was a member of First Baptist Church of Hazlehurst where he served as a deacon for many years. He was preceded in death by his wife, Lanell Dominy Claxton.
For more, see the obituary page.