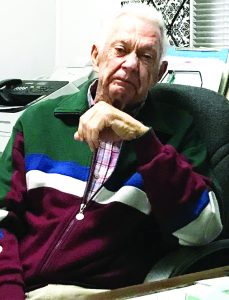 By
MARY ANN ANDERSON
When Dr. Sidney Johnson hangs up his stethoscope, takes down his shingle, and closes his office on December 18, he’ll end his medical practice that began in Hazlehurst more than five decades ago.
“It’s past time to retire,” says Johnson, who is Hazlehurst’s oldest and longest practicing physician. “It’s too hard to get up and down the hallway.”
As autumn wanes and winter approaches, the change of seasons metaphorically coincides with Johnson’s decision to retire. At 82, he is not as limber or fast as he once was, and he is entering the winter of a life well lived treating the sick, healing the wounded, and delivering babies. Lots of babies, too.
“It was a good many over two thousand,” he says. “I used to deliver just about all of the babies in Jeff Davis County, Appling County, and Lumber City. I even delivered some from Florida.”
The soft-spoken physician, who most people simply call “Doc,” will see patients during regular hours of 8 a.m. until 1 p.m. this upcoming Sunday and Monday. Then on Tuesday when the final patient leaves the building, he’ll turn the lock on the door for good.
These last days are bittersweet for him and the thousands of patients he has seen since he first began practicing in Hazlehurst as a country doctor some 53 years ago.
“I’ve seen just about everything you can see through the years,” he says.
Doc is originally from the Butts County community of Indian Springs, near Jackson. He graduated from Jackson High School and then entered the University of Georgia before moving on to the Medical College of Georgia in Augusta.
There was no singular defining moment that prompted him to go to medical school, only that he liked the science of the medical profession.
“I got into medical school after three years at Georgia,” he says. “And then after I went to medical school for a year, the University of Georgia gave me a Bachelor of Science degree.”
Doc graduated from MCG in 1965 and moved to Hazlehurst in 1966.
Of coming to Hazlehurst, he notes, “I worked in some small communities before I came here with Dr. Charlie Jones. He’s the reason I came here. He wanted to go to a country town. I didn’t have any idea what I wanted to do, so I thought I would work here for a year and see what I wanted to do.”
When he graduated from MCG in 1965, it was also the same year he first met Benjamin Goldman, another of Hazlehurst’s beloved family physicians. Dr. Goldman had moved to Hazlehurst in 1937 and subsequently built Goldman’s Hospital in 1939. When Dr. Goldman passed away in 1966 of leukemia of the bone marrow, Doc bought Goldman’s Hospital from Katye Goldstein Goldman, Dr. Goldman’s widow, and has been there ever since, stretching from that planned one year until generations later.
In looking back over the years, he notes, “It was almost like the Stone Age until now. Things were so far behind in Hazlehurst that it was unbelievable.”
Although Hazlehurst may have been “far behind” the rest of Georgia in myriad ways, Doc remarks of one clearly interesting phenomenon about the county. He had been here for a few years when the state health department contacted him.
“They said people were living as long here as they were in the most affluent areas of Georgia,” he says before smiling, “They wanted to know what was going on in our county.”
While that longevity might be attributed to the good old-fashioned country living of the time, much has certainly changed since Doc walked out of MCG as a newly-minted doctor, especially in technology and advances in medicine itself.
“We didn’t have sonograms until much later after I began practicing,” he points out. “MRIs and things like that were just a dream. You get very familiar with x-ray therapy, and there’s so much of that around here, but proton therapy is so advanced over that.”
Doc has also been fortunate to have several longtime employees, including Solita Miles, who worked for him for 42 years before her own retirement; Gail Spann Miller, who has been with him for 37 years; and Phyllis Griffin, who clocks in at 26 years. Both Miles and Miller were born in Goldman’s Hospital, the same building where they worked for so long.
Now that Doc’s retirement is but a few scant days away and he will be moving forward with his newly-found free time, he says his plans include “a little bit of traveling and a lot of reading,” although there are no specific titles on his reading list.
“I read everything,” he says. “Magazines, books. You name it, and I read it.”
As for traveling, he would like to see more of Europe and South America, two continents he has journeyed to in the past. He counts Italy and Portugal among his favorite haunts and has a particular affinity for Madrid, Spain’s capital and cultural heartbeat.
While Doc always had a heart toward medicine, he points out that he worked with the National Security Agency when he was young. If he hadn’t followed medicine as a career path, he says that he might have stayed with the NSA.
“I was a cryptographer,” he explains, saying that he worked on Russian fighter codes. “It was very, very interesting what I did.”
Doc has two children, Sidney and Michele. Sidney, who most call Sid, lives in Hazlehurst, while Michele lives in Arlington, Va., where she works for the Central Intelligence Agency. She has two sons, Nathan and Spencer.
When next Tuesday rolls around, it will be the end of the era of country doctors in Hazlehurst, an era that included with Doc the likes of Benjamin Goldman, J.M. Oliver, John Hall, and Samuel Martin.
“I’ve been crying for two weeks,” he says as he tears up yet again. “So many people have come by and start crying, and I cry with them. I had no idea that people cared so much.”