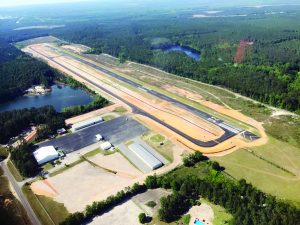 By TOMMY PURSER
Editor-Publisher
Dealing with bureaucratic red tape sometimes can be a struggle.
And contractor Joey Hiers of Baxley is struggling with unpaid invoices amounting to hundreds of thousands of dollars for work he did constructing the taxiway at the City of Hazlehurst’s airport.
In an effort to get Hiers his money, the Hazlehurst City Council summoned all the parties involved in the planning, financing and engineering the multi-million dollar project to find out what the holdup was and how long it would be before the money would be released to the city so the city, in turn, could pay Hiers. Sonya Cedallos of Croy Engineering and Jeffery Griffith with the Georgia Department of Transportation did most of the explaining to the council. No representative of Trinity Electrical, which did the lighting work at the airport, was able to attend the meeting.
Mayor Bayne Stone opened Monday’s meeting by expressing his appreciation for the millions of dollars officials in Atlanta bestowed on the city over the years for improvements at the airport. Federal funds amounting to $6 million had enabled the city to extend the runway several years ago and, more recently, to build the taxiway.
Stone pointed out that as a result of the improvements, all the hangars at the airport are full and Airport Manager Cody White has a waiting list of pilots wanting to base their airplanes in Hazlehurst.
While he said he was thrilled with how everyone had worked together to make the airport one of the leading small city facilities in the state, Stone said there were some loose ends that needed to be tied together and he began the discussion by asking “do you have any idea about the next shipment of money.”
Stone pointed out that the city was two months behind on paying Hiers and while City Clerk Vernice Lopez was able to come up with $50,000 to pay on the bills, Stone had to borrow another $100,000 at a local bank and the city was still coming up short on what they owe Hiers.
Stone pointed out that the city owes Hiers $533,000, Trinity lighting company $115,000 and the engineering firm $70,000.
After a long discussion, Cedallos said that by the end of the week, she would have all the figures compiled necessary to begin the process of forwarding funds to the city. Once those figures are compiled, it will take 3-4 weeks for the payments to be processed in Atlanta.
In the only other business before the council at Monday’s meeting, Hiers gave an update on the work on the Pat Dixon Road roundabouts which he is also working on. He said he was waiting on Georgia Power, AT&T and Satilla REA to get their utilities moved and added that he was under the impression the city would move the fire hydrants but when he got the contract he discovered that was not the case, so he planned to send a crew to move the fire hydrants.
Stone pointed out that the city had the equipment and the labor necessary to move the fire hydrants and City Coordinator Carl Leggett could get the work started on the next day.
While some council members were concerned about whether or not the two roundabouts, at the intersections of Pat Dixon Road with Collins Street and Charles Rogers Blvd., would be completed by the time school opens for the 2018-19 school years, Hiers assured the council that the work would be completed.
Ward 2 Commissioner John Ramay asked what kind of guarantee Hiers could give the council that the roundabouts will be open before school begins, Hiers said, “I can guarantee you. I’m not worried about it.”
Hiers explained that the roundabout lanes will be completed first, to enable traffic to flow while workers cut out the middle of the roundabouts. He pointed out that, in May, 12 inches of rain fell which reduced the days available for work during the month. While he said he can’t guarantee against an act of God, “if push comes to shove, we can put up a four-way stop until we finish.”
While both intersections are located in the city, Jeff Davis County has an easement at the Collins Street site and that has to be cleared up by attorneys.
Hiers said his plans now are to start with the Collins Street site and get it open to traffic before moving to the Charles Rogers Blvd. site.
While Monday’s meeting agenda did not include a citizens comment section, three people were present at the meeting to speak in opposition to the roundabouts and Stone gave them an opportunity to speak.
Niles Dixon, while admitting he knew little about roundabouts and had limited experience with them, questioned the costs as opposed to the cost of a four-way stop and said he viewed roundabouts as confusing, adding that he did not understand when a driver is supposed to go into the roundabout.
Pam Anderson reiterated her concern that the roundabouts are going in the wrong place, would be disruptive and would cause a lot of problems.
Jennifer McCullough said she thought the roundabouts would back up traffic.
Hiers, who has built several roundabouts in the past, disagreed with them.
“If any of you have ever been to Fernandina, you’d see it is a safer way to getting traffic through than with a four-way stop,” he said. “A roundabout is a continual flow. When you see it in action and watch the flow of traffic, you’ll see. The traffic never stops. It’s a continual flow. It’s better than four-way stops.”
Stone pointed out that the council had worked and dealt with the issue, and struggled with it “a long, long time. These men, including me, try our best every time we sit here to make the best judgment to help our community. We have made the decision and it’s full speed ahead.”
Ward 1 Commissioner Dywane Johnson thanked the visitors for coming to the meeting and said he wished everyone would come to the city council meetings.